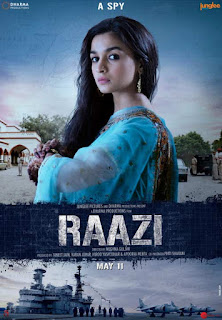 This is a total patriotic thriller about an Indian girl who chooses her destiny according to her fathers will. She willingly satisfies her role as a Indian spy.  It is based on the Indo-Pak war in !971
While the supporting cast and the crew have portrayed their role well, extra points should be given to actress Alia Bhatt. Through her flawless acting has proved that the student is surely maturing in the thick skinned movie industry.

The music is heart touching especially the song “Ae Watan” and “ Dilbaro” wiich wins the heart of youngsters and to be wed girls respectively.

There are some well crafted scenes which runs through your nerves. All in all a must watch movie for all those patriotic citizens and NRIs of India who still have their Indian nationality intact in their minds.
Posted by Leena at 10:50 AM